The Official Spanish Chamber of Commerce in Belgium and Luxembourg organized, last 27th November at the Hotel Le Plaza, their yearly Gala Dinner. The Embassy of Spain in Belgium, the Leading Brands of Spain Forum, Marca España and the Spanish Office for Patents and Brands (OEPM), collaborated specially on the event organization. During the dinner, the awards “Friends of Marca España” and “Friends of the Spanish Brands” were given. These awards aim to publicly acknowledge certain Belgian people, companies and institutions for their outstanding support and collaboration with Spain and/or Spanish brands within each of their respective professional spheres. This is the ninth edition of the awards and the first in Belgium, with previous ceremonies having taken place in Hong Kong, Shanghai, Moscow, London, Miami, Tokyo, Dubai, and Mexico. 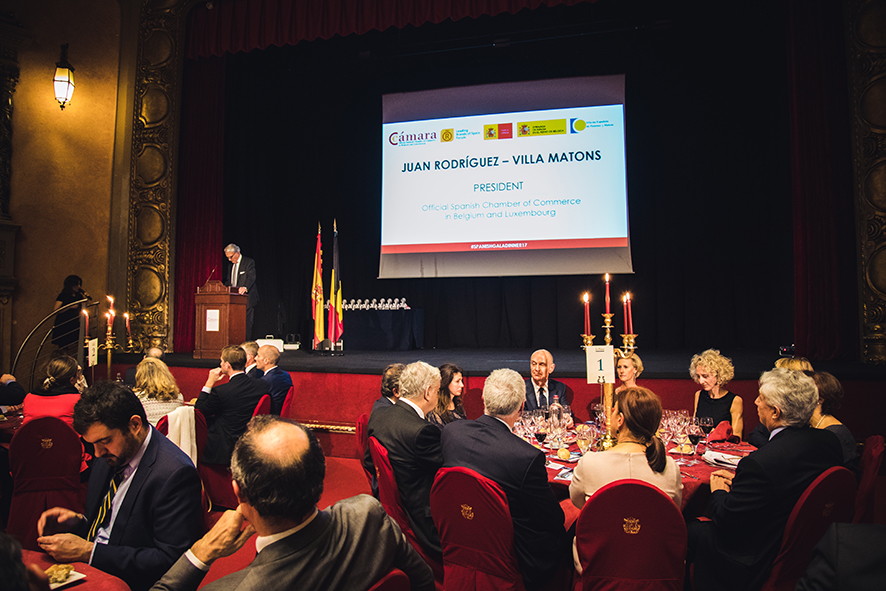 After a welcome cocktail where the participants were delighted with cava offered by Freixenet, Institutional Wines D.O. Ca Rioja, Estrella Galicia beer, ibérico de bellota ham offered by the Regional Government of Extremadura and an appetizer elaborated by Marcos Morán, Gastronomic Director of the Restaurant Hispania Brussels, the Gala Dinner and Awards Ceremony started.

First, Juan Rodríguez-Villa, President of the Spanish Chamber of Commerce in Belgium and Luxembourg took the stand. During his speech, he welcomed all the attendees to the Gala Dinner, went over all the activities that took place at the Chamber on 2017 and congratulated all the awardees of the night.

Afterwards, the masters of ceremonies, Sergi Ferré and Laura Martínez, Cultural and Political Counselors respectively, at the Spanish Embassy in Belgium, gave the word to José Luis Bonet, president of the Leading Brands of Spain Forum. During his speech, Bonet highlighted the important role of the Chambers of Commerce abroad, as well as the Friends of the Marca España and Friends of the Spanish Brands’, to make them stronger and more competit 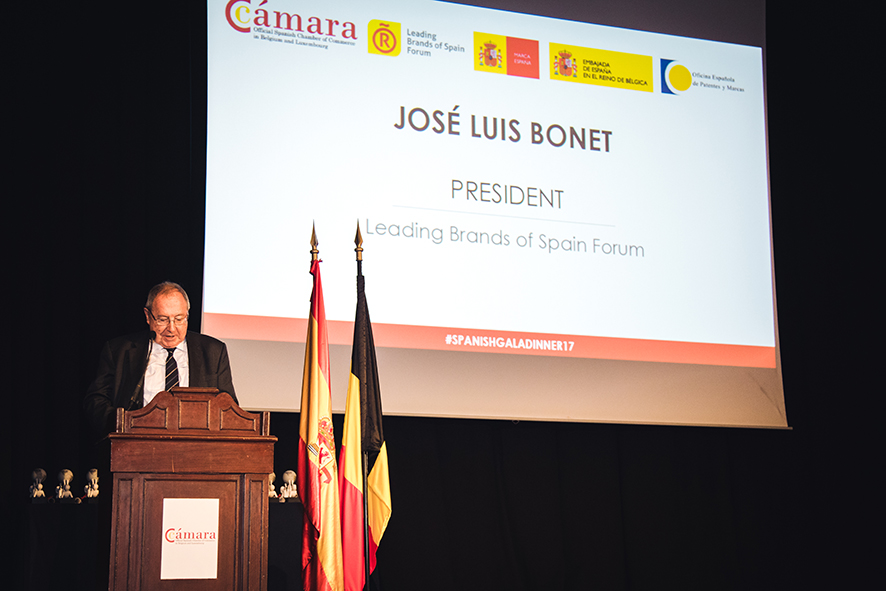 After the awards ceremony, the attendees enjoyed a gourmet Spanish menu elaborated by Marcos Morán, who owns a Michelin Star and has been recognized with the National Gastronomy Award.

After the dinner, the Ambassador of Spain in Belgium, Cecilia Yuste Rojas, took the stand to congratulate the initia 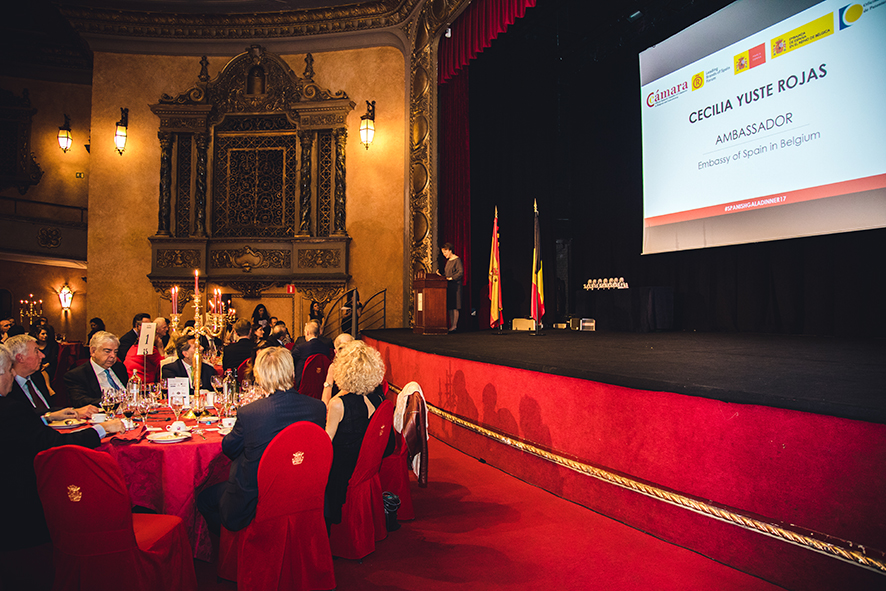 tive of awarding the people who help to create closer ties between Spain and Belgium. Then, after the video presentation of Marca España, the masters of ceremonies presented the second awards ceremony “Friends of the Marca España” in Belgium. The awardees were:

After the awards ceremony, Bert Dehandschutter, in the name of all the awarded of the night, showed his appreciation for the awards given by Marca España and by the by the Spanish Brands for their relationship with Spain, both in the cultural and economic aspects. 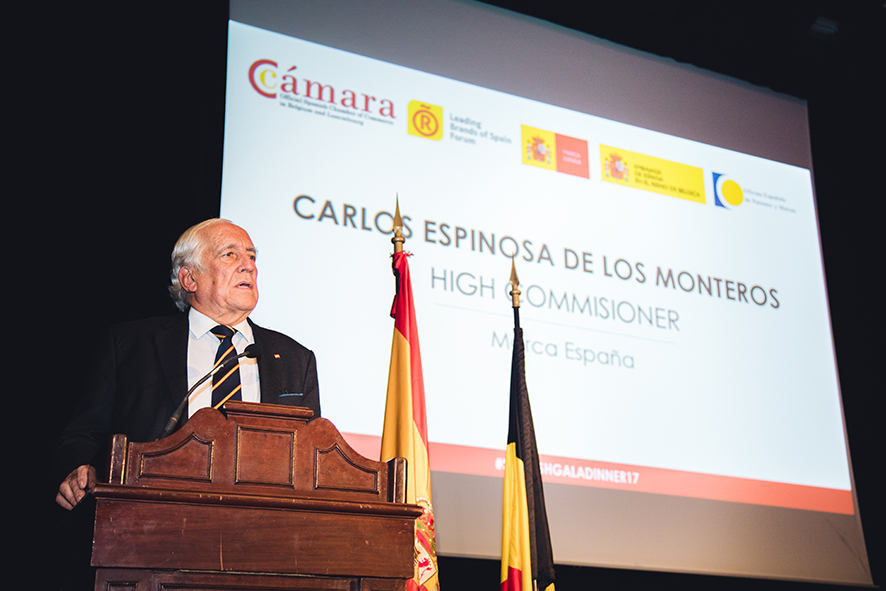 The Chamber thanks all the attendees their presence, and the Embassy of Spain in Belgium, the Leading Brands of Spain Forum, Marca España and the Spanish Office of Brands and Patents their collaboration in the organization of the event. Furthermore, we appreciate the collaboration of the sponsor companies and institutions: Freixenet, D.O.Ca Rioja, Estrella Galicia, Hispania Brussels, Quality Media Producciones, Junta de Extremadura, Indra and Santander Consumer Bank.

Cocido Madrileño: A Benefit Lunch for Action Against Hunger at Terry’s Salcedo

On October 20, a benefit lunch was held for Action Against Hunger, in cooperation with La Camara and Terry’s Salcedo, for a cause to help fight malnutrition in the Philippines.

The lunch also celebrates Spain’s traditional dish, the Cocido Madrileño, a chickpea-based stew with vegetables and meat as well as other entrée specialties. It was held at Terry’s Bistro in Salcedo Village, a classic Spanish restaurant that serves traditional Spanish cuisine.

The restaurant’s very own Chef Juan Carlos de Terry introduced Cocido, Madrid’s quintessential stew, which was the highlight of the lunch. It was prepared with Terry’s chorizo and Morcilla Iberico-bellota, beef shank, pork belly, chicken, Andalusian chickpeas, simmered in a flavorful broth. The lunch was attended by several Spanish expats and other guests who enjoyed the sumptuous lunch paired with wine.

This charity event for Action Against Hunger was made to help promote nutrition and fight hunger wherein part of the proceeds of the benefit lunch will be donated to their projects. Action Against Hunger was launched in 2000, which has helped more than 70,000 people who received various aids such as nutritional support and access to safe water and sanitation, among others. Part of their project is the Restaurants Against Hunger, which invites restaurants all over Manila to participate to end hunger in the country by “promoting a solitary dish” from their menu. Part of the proceeds of the price of the dish will be donated for the projects to fight malnutrition in the Philippines.

The Spanish Chamber of Commerce in Great Britain organised in June the first edition of the Spanish Tapas Tour, a new gastronomic event that brought to London the best flavours from Spanish cuisine.

Based on one of the most important events in Spain, the week of the tapas, The Spanish Tapas Tour took place from 12th to 18th June. During that week, 10 of the best Spanish restaurants in London offered a Tapa and a drink at a fixed price, with plates that represented a wide range of regions from the country.

During that week, more than 350 tapas were sold and the public could try real Spanish flavours and felt just as if they were in Spain. The Spanish Tapas Tour also had its own passport, where people got a stamp after tasting the tapa of each restaurant.

The participants of the Spanish Tapas Tour had the chance to take part in two different contests. The first one gave them the opportunity to win a city break to Spain. They just needed to sample at least 4 different tapas and choose their preferred one. A raffle took place among the eligible passports and a lucky winner will now travel to Spain. We would like to thank Iberia Express and NH Hotels for kindly providing the flights and the hotel stay for two people.

The most highly valued tapa from the public vote was the Tazacorte octopus from Arbina. We want to congratulate and thank them for their active involvement on this event.

A second contest was held on Instagram. People should upload a picture of their tapa using the hashtag #SpanishTapasTour. The most liked picture won a hamper of typical Spanish products, thanks to Eatapas.

The award was given at an event organized by everis with the collaboration of the Chamber, attended by such figures as Alexander De Croo, Belgian Deputy Prime Minister, Cecilia Yuste Rojas, Spanish Ambassador in Belgium, Miguel Aguirre de Cárcer, Ambassador Permanent Representative of Spain in NATO, members of the Chamber, business executives, members of the Spanish and international diplomatic corps, as well as representatives of European institutions.

Everis is a company of the NTT DATA group that offers business solutions, strategy, development and maintenance of technological applications and outsourcing. The company, which operates in the telecommunications, financial, industry, utilities, energy, public administration and healthcare sectors, achieved a turnover of 816 million euros in the last fiscal year. Nowadays, it has more than 17,000 professi 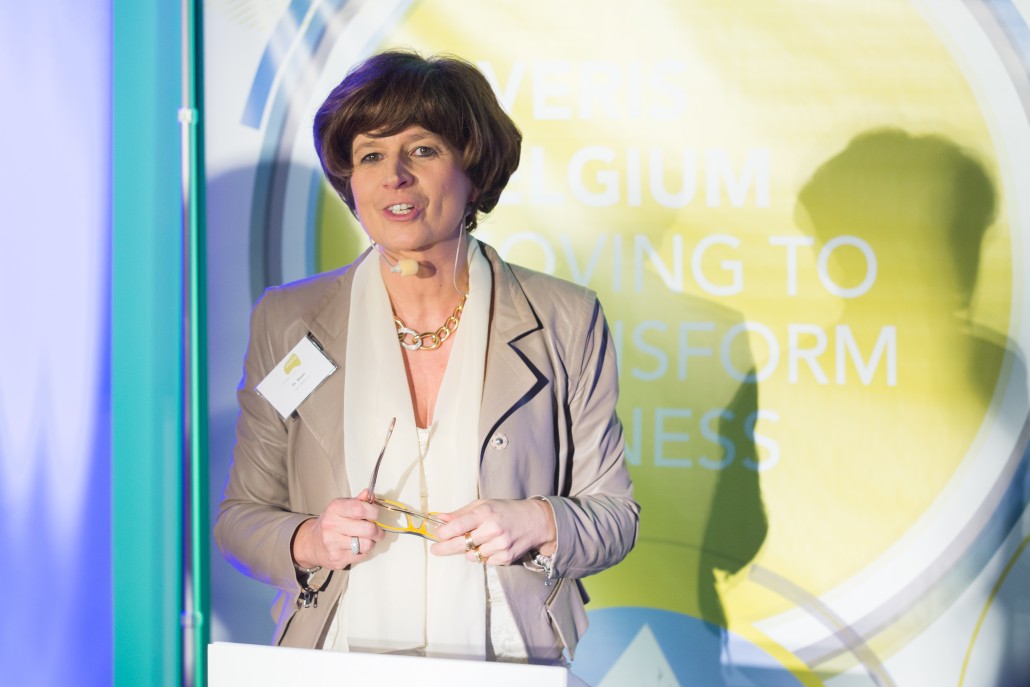 onals distributed in its offices and centers of high performance in 15 different countries.

The Catalan technology consultant lands in Belgium in 2011 with only two people. Five years later, everis has grown steadily, reaching 39 million in the 2016 financial year. Its accelerated growth in staff (expected to reach 450 people working on its projects by March) has led to the relocation of its Belgian headquarters to their new offices.

As part of the inauguration of its new headquarters in Brussels, an event was held in which attendees could tour the new offices, meet their employee-robot Pepper (with whom they could interact and take photographs) and live different demos of some of the activities carried out by the company.

Later, Els Blaton, CEO of the company in Belgium, gave a welcome speech to all attendees, in which she thanked their presence and reviewed the results obtained by everis Belgium in these five years.

She underlined that she feels “proud of the group for three specific reasons: the culture of the company, the results obtained and their showing of talent, creativity and innovation.” In addition, she wanted to highlight the diversity of her workforce of 28 different nationalities and gender equality, reaching almost 50%. 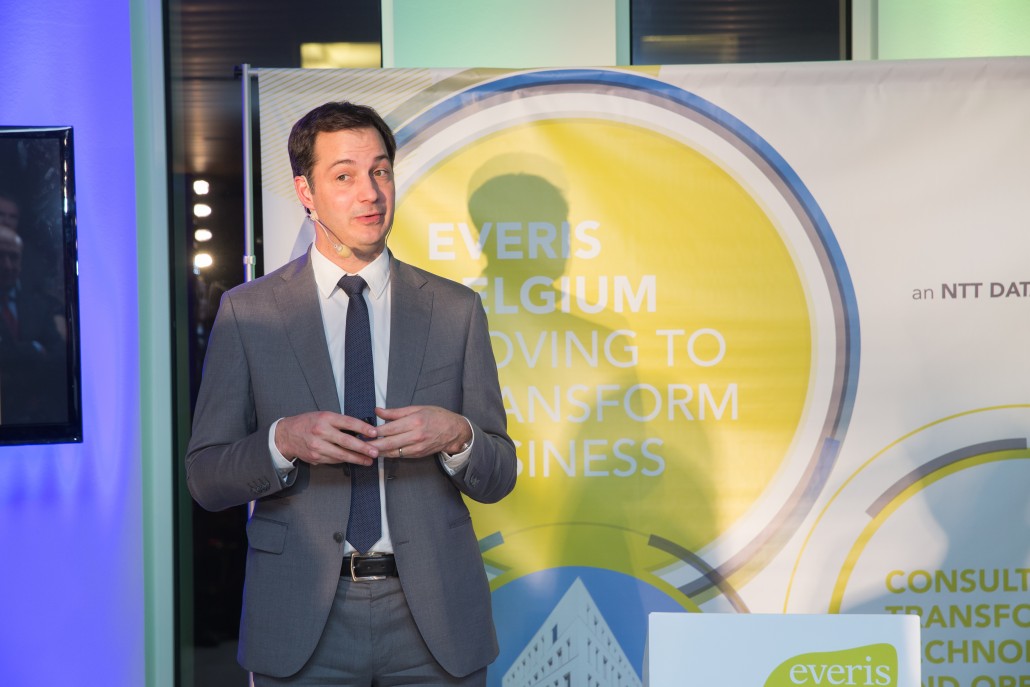 Next, Alexander de Croo, Belgian Deputy Prime Minister and Minister of Development Cooperation, Digital Agenda, Telecommunications and Post Office, made a pro-digital exhibition focusing on the importance of technology in people’s lives.

De Croo pointed out the need for political forces to foster the flow of information that could benefit citizens, as well as the importance of investing in education: “the real infrastructure of today are human beings.”

Following the intervention of De Croo, the President of the Chamber, Juan Rodríguez-Villa with Ambassador Cecilia Yuste awarded the “Company of the Year” prize 2016 to Óscar Abril, Managing Partner at everis BeNeLux. Rodríguez-Villa acknowledged the role of everis in Belgium and expressed the Chamber’s commitment to support the establishment of Spanish companies in Belux. 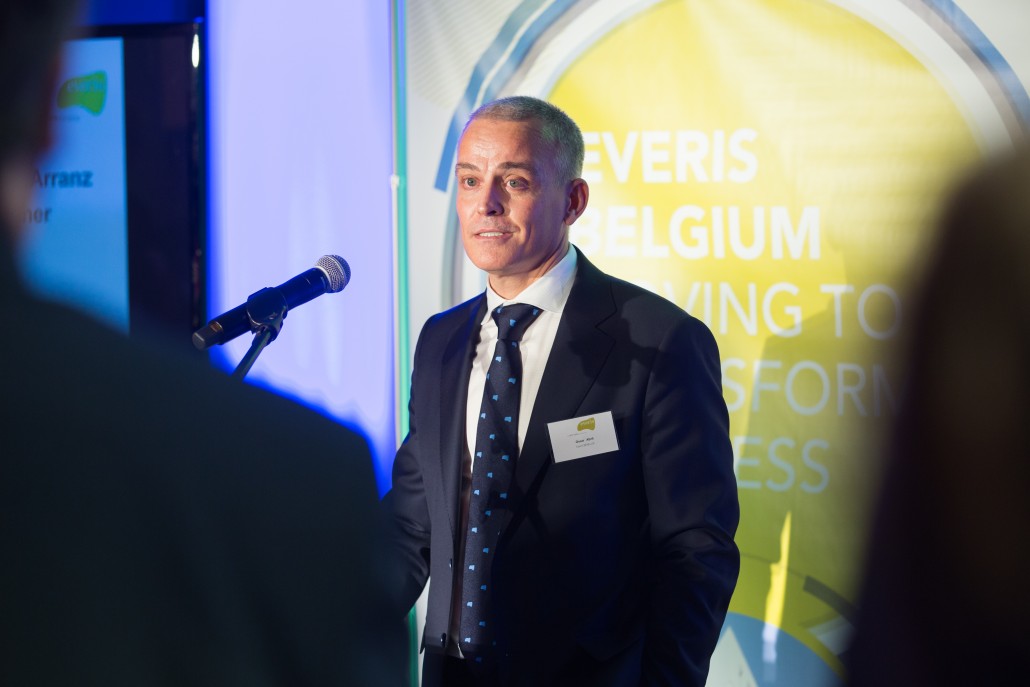 Óscar Abril was excited about the prize: “this award means a lot to us. We celebrate success and growth, our relocation to these offices and our establishment in the Netherlands.”

Making a synthesis of their trajectory in Belgian territory, the difficulties and the good results obtained, Abril concluded “of what I am most proud of is the team and its evolution. We have good people who share the everis values and ambitions. ”

After the intervention of Abril, Marc Alba, father of robot Pepper, made an exhibition in which he explained the benefits of technology combined with human capital within the company.

Finally, all the attendees enjoyed a cocktail to celebrate the anniversary of everis, the inauguration of their new offices in Brussels and the award given by the Chamber.

COCEF celebrates its 130th anniversary and delivers its 2016 awards

The Official Spanish Chamber of Commerce in France (COCEF) celebrated its 130th anniversary on 15th December. The Spanish Ambassador in France, his Excellency Ramón de Miguel and the President of COCEF, Mr. José Michel García, handed the prizes of the 2016 COCEF awards.

Among the prizes awarded, SAICA received the Company of the year award, CT Ingenieros the the SMEs award and Mrs. Teresa Ribera (IDDRI director and former Spanish state minister for climate change) received the 2016 Person of the Year award.

During the event held in the prestigious Opera salon of the Paris le Grand Intercontinental Hotel, the president of the COCEF talked about the parallelism between the second industrial revolution and its enormous socio-cultural transformations that took place in 1886 (when COCEF was founded), with the current period, given the revolution taking place in the technological field and the new environmental challenges.

The Ambassador of Spain in France, his Excellency Ramón de Miguel, highlighted the close collaboration between COCEF and the Economic and Commercial Office of the Spanish Embassy in France. He also emphasized the effectiveness and the importance of the role of COCEF in the international trade, for the companies’ services and congratulated and showed his admiration to the COCEF President.

Close to 200 people attended the event, including members of the Spanish diplomatic body and the executives of the most influential companies of both Spain and France.

The President of FEDECOM Juan Rodríguez-Villa Matons and the Secretary General of the Official Spanish Chamber in Belgium and Luxembourg, María Catalán, participated in the celebration supporting the activities developed by COCEF in France.

The Official Spanish Chamber of Commerce in Belgium and Luxembourg has the pleasure of inviting you to its luncheon-debate with Juhan Lepassaar, head of cabinet of Andrus Ansip, Vicepresident of European Commission and responsible for the Single digital market. The topic of the luncheon-debate will be “Digital Single Market” and it will be held on Thursday 15th of September from 12 PM to 2.30 PM.

The event will be held in the Sheraton Brussels Hotel (Place Rogier). 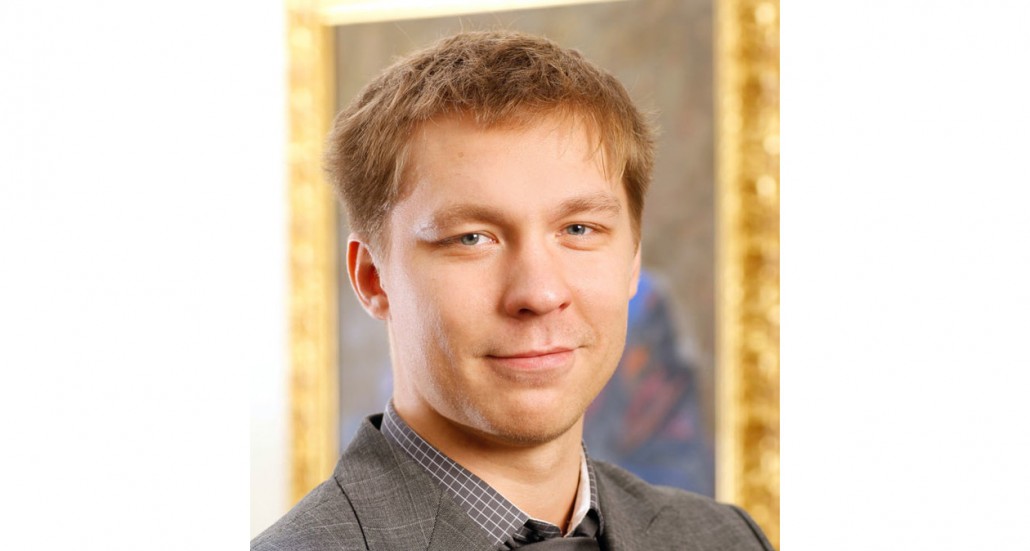