The President of the Spanish Chamber of Commerce, José Luis Bonet, recognized the good work done by the Government of Mr Rajoy and the impetus given to the cameral system, after the approval of the Basic Law 4/2014 of 1st April on Chambers of Commerce, Industry, Services and Navigation. Furthermore, he expressed his determination to continue having a close collaboration with the new government.

Then, the results of the recent elections hold in the territorial chambers were notified to the plenary session.

The presidents of the ports, digitalization, circular economy and employment commission showed the work that they were developing. It was presented the new challenge due to the economic cycle changing, as well as the society need for adaptation and, particularly, to the new digital era.

Ramón Paredes, president of the employment commission, highlighted the need to adapt youth training to the new market challenges, to face an increasingly professional training offer.

All the commissions are looking for new solutions, working closely with the administration, to optimize the advantages imposed by the new economic horizon.

The Spanish Chamber of Commerce General Director announced the opening of a new Chamber in Malta, and the upcoming implantations in Malasia, Singapur, Tailandia, South Korea and the UAE.

Besides, it was announced the future participation in the European Parliament for businesses next 10th October in Brussels.

It is also being analyzed the celebration of the biannual COMECOES (Chamber of Commerce foreign networks) meeting in Madrid.

The Presidency, Executive Committee and the Plenary mandate will expire in the frame of the next November the Plenary Session, consequently new members will be elected.

The Federation of Official Chambers of Commerce of Spain in Europe, Africa, Asia and Oceania (FEDECOM) celebrated on March 9th its Ordinary General Assembly in Madrid.

The topics that were discussed during the Assembly were, for example, the functional link between the network of  Official  Chambers of Commerce abroad and the Chamber of Commerce of Spain, the added value of belonging to the FEDECOM network and the collaboration between the Chambers member. It was also decided to grant the FEDECOM’s Enterprise of the Year Award 2018, and to inform the members about the accession of new Chambers to the Federation

Antonio García Rebollar, Director General of Trade Policy and Competitiveness of the Ministry of Economy, Industry an Competitiveness, welcomed on March 9th in Madrid the Presidents and General Secretaries of the Federation of Official Chambers of Commerce of Spain in Europe, Africa, Asia and Oceania (FEDECOM), concurring with the Ordinary General Assembly celebration.

Throughout the reunion, the FEDECOM representatives had the opportunity to inform the  Director General about the external Chambers network status and also about the different problems they are facing. A reform of the Royal Ordinance that regulates the external Official Chambers of Commerce was announced by Antonio Garcia Rebollar, with the aim of adapting its content to the current reality.

Right after, Enrique Fanjul, member of the Scientific Council of Elcano Royal Institute, took the floor. During his intervention, Fanjul explained that over the past few years, the number of Spanish professional established abroad had increased considerably. These professionals work in Spanish companies, in multinationals, in public organizations of the countries where they are, and in international organizations. He argued that it is necessary to make an effort and establish mechanisms to take advantage of this asset of great value.

Afterwards, some success stories about professional networks abroad were presented.

The first success story was done by Wim den Tuinder, Director of IESE Alumni Association & Institutional Development. During his intervention, Wim explained the expansion process of its alumni network and the different programs of development and expansion that are carried out from IESE.

The next success story was presented by Nicolás García, Director of the “Liga Global Network”. During his intervention, Nicolás talked about the strategy and the goals that are pursued through this initiative, which seeks to consolidate the positioning of LaLiga worldwide.

Then, Juan Rodríguez-Villa, president of the Federation of Spanish Chambers of Commerce in Europe, Africa, Asia and Oceania (FEDECOM), described the importance of FEDECOM to create relations between Spain and other the countries around the world

Finally, a debate took place about the subject matter in which all the attendees could participate. Among the most important subjects, they discussed about the role of women in the business world, the emigration of the young Spanish talent and the role of the Spanish companies in the process of the internationalization of ‘Marca España’.

Juan Rodríguez-Villa Matons, president of the Federation of Official Spanish Chambers of Commerce in Europe, Africa, Asia and Oceania, took part on July 18th in the Extraordinary Plenary Session of the Spanish Chamber of Commerce, which took place at BBVA headquarters in Madrid, concurring with the celebration of the “Big Data, Big Day” event and the presentation of the BBVA Research’s “Impacto de la Digitalización de las Empresas Españolas” report.

During the meeting, José Luis Bonet, president of the Spanish Chamber of Commerce, performed a first balance of the “Plan de Impulso a la Digitalización de las Pymes Españolas”, a project jointly launched with BBVA whose object is to explain and foster Spanish SMEs’ transition to a a digital environment. This program agrees with BBVA Research’s report when stating that, even if Spain is better equipped than other Southern European countries like Italy or Portugal, there is still a great margin of improvement when it comes to SMEs’ adaptation to new technologies.

To conclude, the forum stressed the importance of said adaptation not only to improve SMEs’ competitiveness in mature market niches, but also as an engine for exports to new markets. These tools, along with new data-engineering techniques, are, according to the experts, the future of Spanish small and medium enterprises.

IV Edition of the European Parliament for Enterprises 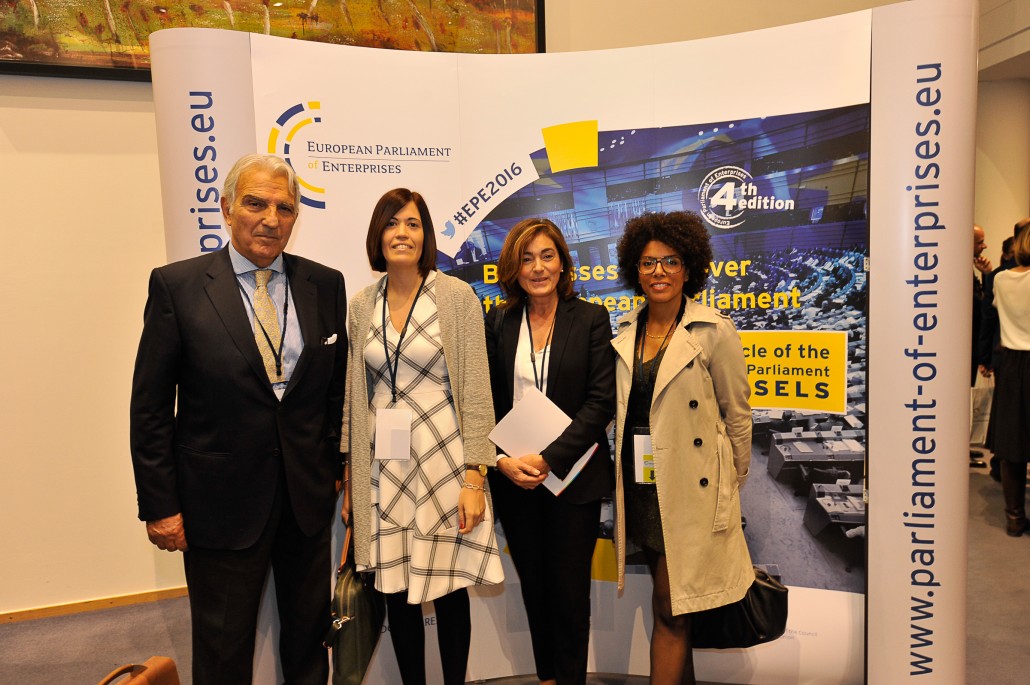 The event was opened by the President of the Spanish Chamber, José Luis Bonet, in the welcome cocktail which took place on October 12. As in previous years, in the framework of the European Parliament of Enterprises, a working breakfast was organised between the business delegation and the Spanish MEPs in the Hemicyle the 13 October.

After the MEPs’ speeches, a question and answer period was opened and the Spanish business representatives could interact with them.

The working breakfast aims to building bridges between the business community and the European legislators in order to encourage an exchange of opinions and views about policies and Community programmes of interest to companies.

The European Parliament for Enterprises was held during the afternoon. Under the slogan “Europe needs Business, Business needs Europe” more than 800 entrepreneurs of 45 different European countries gathered in the Hemicycle of the European Parliament and rose to their feet to demonstrate their belief in the European project. Besides, they had  the chance to have a direct debate with high representatives of the EU institutions and to provide them with a direct bottom-up feedback on EU policies. The Spanish delegation was made up of 70 entrepreneurs and representatives of different Spanish chambers of commerce led by the president of the Chamber of Spain, José Luis Bonet. 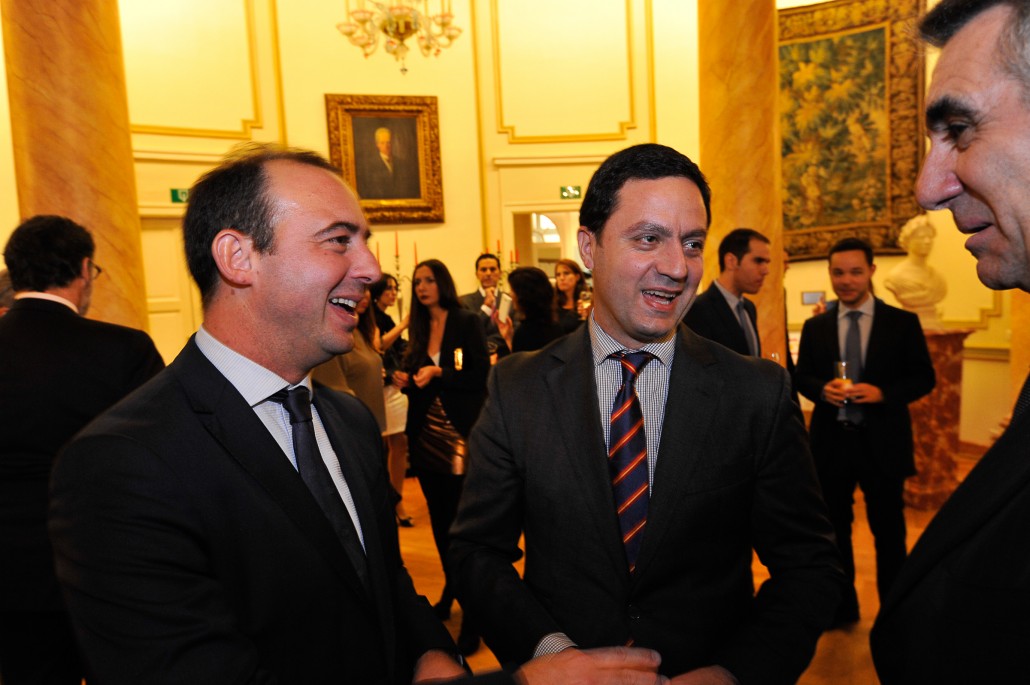 “The time has come for businesses to reiterate their capacity and willingness to provide solutions to the challenges of today: globalisation, unemployment, unfair competition, migration and climate change.” With these words EUROCHAMBRES` Chairman Richard Weber inaugurated the fourth edition of the European Parliament of Enterprises.

During the subsequent debates and votes on trade, the single market, sustainability and skills, companies called for EU policies allowing them to contribute addressing these challenges while being able to compete globally.

Plenary session of the Spanish Chamber of Commerce: “It is impossible to be competitive without being sustainable”

Juan Rodríguez-Villa Matons, President of FEDECOM Europe.Africa-Asia-Oceania, participated in the Plenary session of the Spanish Chamber of Commerce, which was held on 19 July Santander Bank’s headquarters in Madrid. The meeting was also attended by the Director-General for Environment of the European Commission, Daniel Calleja.

Calleja highlighted that the Chambers of Commerce have a crucial role to play in implementing policies to promote the competitiveness and the growth of our businesses. He claimed that to consolidate the economic recovery we have to work in four areas: investment, internationalization, innovation and adoption of new production models, and, finally, integration and education.

In addition, the Plenary session of the Spanish Chamber of Commerce approved the incorporation of Gestamp, Orange, SEAT, SUEZ Spain, Deloitte and Fire de Barcelona as vocal collaborators. With the inclusion of this new group of companies the business participation in the institution through the vocal collaborator role is widened and strengthened. Which is is a key element in the Chamber system empowerment.

Juan Rodríguez-Villa Matons, President of the Official Spanish Chambers of Commerce in Europe, Africa, Asia and Oceania, participated in the Plenary of the Spanish Chamber of Commerce, which took place on 19 April in Madrid.

Iberia, Banco Sabadell, Endesa and Alstom España became member of the Spanish Chamber of Commerce. With these incorporations the corporate involvement in the Plenary, which is the highest governance body of the institution and in which the 28 largest Spanish companies are represented in their respective sectors, is strengthened.

The institutional support of the large companies as well as its economic contribution allow the launch of new support programs for the SMEs and entrepreneurs in order to strengthen the Spanish production system and its implementation by means of the 88 Chambers, which ensures the structuring of the territory.

Business meeting of FEDECOM and the Spanish Chamber of Commerce

On 10 March a representation of the European Chambers that are part of the Federation of Spanish Chambers of Commerce in Europe, Africa, Asia and Oceania (FEDECOM) travelled to Madrid for a meeting with the team in charge of the Integral Programme of Qualification and Employment (PICE) Management at the Spanish Chamber of Commerce.

The PICE is an initiative of the Spanish Chamber of Commerce. It is part of the Entrepreneur and Young Employment Strategy of the Spanish System of Youth Guarantee. It contains a series of measures offered to all the young people to which Youth Guarantee addresses. These measures are customized and deal with the improvement of education and qualification as well as with the promotion of job creation and self-employment.

During the Assembly, among other discussed issues was the role currently played by the Secretary of State for Trade and Investment in CAMACOES network activity and the functional link between the Official Chambers outside and the Spanish Chamber of Commerce. The activity report and the annual accounts for the year 2014 were approved by the Federation as well.